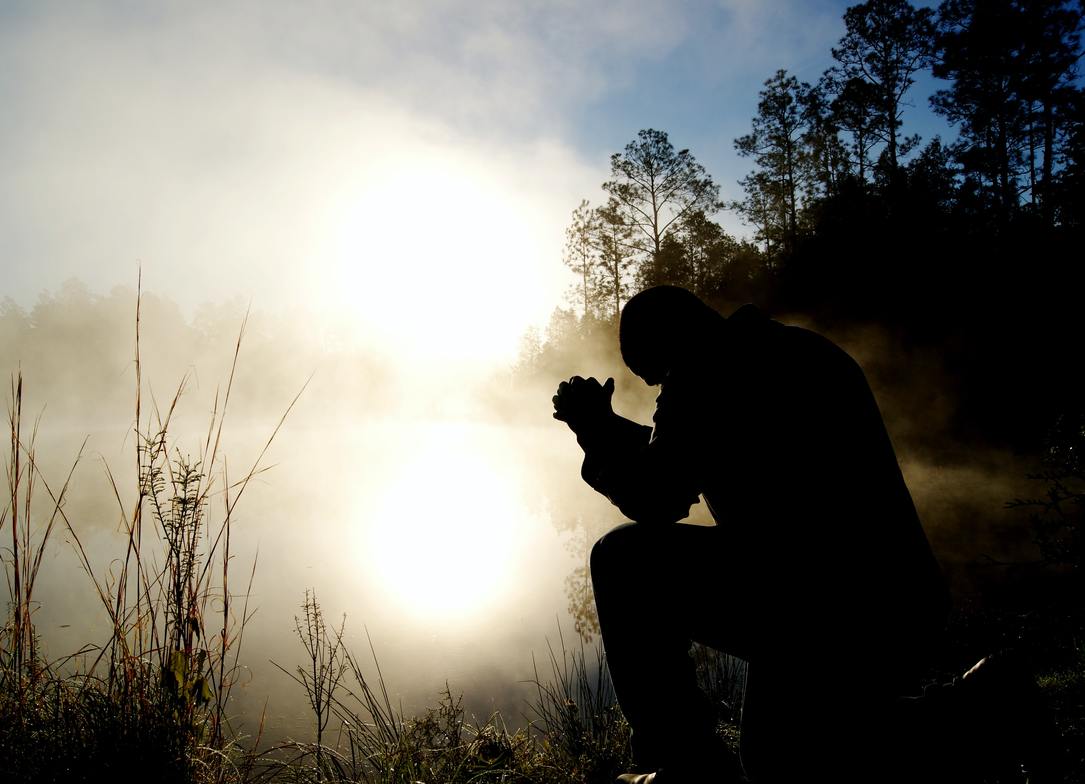 "While Peter was kept in prison, the church prayed fervently to God for him. The very night before Herod was going to bring him out, Peter, bound with two chains, was sleeping between two soldiers while guards in front of the door were keeping watch over the prison. Suddenly an angel of the Lord appeared, and a light shone in the cell. He tapped Peter on the side and woke him, saying, “Get up quickly.” And the chains fell off his wrists. The angel told him, “Fasten your belt and put on your sandals.” He did so. Then he said to him, “Wrap your cloak around you and follow me.” Peter went out and followed him….   he went to the house of Mary, the mother of John whose other name was Mark, where many had gathered and were praying. When he knocked at the outer gate, a maid named Rhoda came to answer. On recognizing Peter’s voice, she was so delighted that she ran in instead of opening the gate and announced that Peter was standing at the gate. They said to her, “You are out of your mind!” But she insisted that it was so. They said, “It is his angel.” Meanwhile, Peter continued knocking; and when they opened the gate, they saw him and were amazed.’ (Acts 12:5a-9,12-16)

Ask any Christian what they find most challenging in the Christian life, and they will probably say prayer. Whether it is finding enough time to spend in prayer or, perhaps more challenging still, the right words for what we want to say, but perhaps hardest of all is coming to terms with the many times when we do not seem to receive an answer or when the answer given is not quite what we had hoped for. Faith tells us one thing, experience another, and eventually, experiences, often all too painful, tend to win the day. There was a time, perhaps, when we would have asked for something, fully confident that God would grant it, but as the years pass and that fails to happen, we find it increasingly hard to keep on believing. As a result, our prayers become mechanical, offered more out of a sense of duty than of expectation.

Yet God does hear and does respond; our failure to hear his answer is often due to our failure to listen or the straight-jacket we often sub-consciously place on God. It may be that the answer is ‘no’ or ‘not yet, but it may also be that God has already answered ‘yes’ if we can throw off the shackles of doubt and bring ourselves to believe it. When did you last pray, expecting God to answer? Have you allowed fear of abusing prayer to lead you to abandon it altogether? We should be reminded of the words in John’s gospel, ‘Truly, I tell you this: whatever you ask the Father in my name, he will give you. Until now, you have not asked for anything in my name. Ask, and you will receive so that your joy may be complete. (Jn. 16:23b-24)

Perhaps this can be your prayer this week, ‘Living God, give me the faith I need to pray and teach me to pray to you in faith. Amen.’ (Nick Fawcett)

A Late Developer? Not Simply a Reflection